(This  article was originally written and posted on my website pinevergreen.com in 2007 and updated in March 2010) 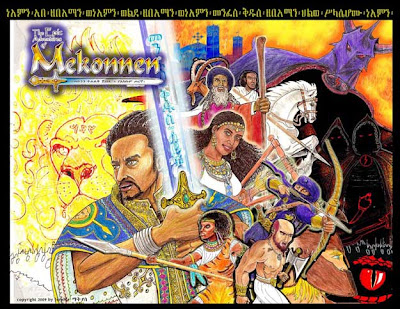 Writing and researching for my epic tale of the adventures of Mekonnen has been—and still is—a life changing experience for me as it has touched all aspects of my life, physically, intellectually and spiritually. This ongoing project has lead me through some mysterious circumstances, causing me to meet some wonderful people along the way, many of whom have become new friends and aquaintances. I have been enlightened to some awesome discoveries in the history, myths and legends of the ancient land and kingdoms of Abyssinia— which is now known as the countries Ethiopia and Eritrea. And my studies are still expanding my historical knowledge and understanding of the cultures of many nations around the world and how they interconnect with each other.

My experiences have inspired me to create the ideal setting, atmosphere and culture of the world of my main character Mekonnen, weaving a back drop for this tale of personal growth, internal conflict and spiritual warfare. I’ve become enamored of the richness of the culture and history of Ethiopia and I’m now a big fan of almost all things Ethiopian/Abyssinian. “Why Ethiopia?” you may ask, and some already have. Why did I pick this particular region from this particular continent that has been underestimated and subdued for centuries and for a long time stereotyped and thought of by most as only a vast land of jungles, deserts, and primitive peoples? A land with a long and glorious past and whose history of Monarchs,
Priests and Warriors in palaces and fortified cities has been mostly forgotten by the western world.

This journal recounts my experiences and reveal how and why I feel I was lead to explore the Horn of Africa, the African Ark.

Who is Mekonnen and what is the Story About?
Firstly, a short description of who is Mekonnen and what he represents in my story. Mekonnen Sofaniyas is a fictional character placed in the real ancient world with real historical figures and events, mixed in my own imagination of fanciful situations, creatures and characters for dramatic effect. He lives in an alternate world where the earthly and spiritual realms intertwine to demonstrate mankind’s struggle with his moral short comings, attacks and temptations from evil forces in the world and The Creator/The Almighy One's redemption plan for mankind and the battles His heavenly armies of Light will fight for us against those evil forces. The story demonstrates that we most be equipped and prepared to fight these battles, where in Mekonnen’s world the spiritual weapons are manifested naturally as real armour, sword and shield, being plugged into the ultimate source of power that flows from the throne of The Almighty One, the Creator of the Universe. Mekonnen most join forces with fellow warriors from around the world that believe in living the Yashar-Sodi—which in ancient languages translates to the Upright/Righteous Way of living before God and Man— to defeat the invading armies from the dominions of Darkness, lead by the nefarious Prince Mastemo.

Warrior from the Ancient Ethiopian Kingdom of Aksum
Mekonnen is a warrior in the royal court of the Kingdom (Empire) of Aksum, one of the first Christian kingdoms of the world. He lived during the prosperous reign of King Amida, also known as Emperor Gebre Meskel (Servant of the Cross), who reigned in the mid 6th century AD. Mekonnen and his allies represents Christians in there walk by faith and the victories and defeats he/she will face in the way of life. There are other main and supporting characters Mekonnen encounters in his journey that will represent many different aspects and situation we may all face in our lives and in our walk with the almighty One/Creator and the way we relate to each other. Like all of us, Mekonnen will meet characters and creatures that will either lift him up to take him to the next level in his life and spiritual growth or try to destroy him or lead him astray, off the path of the special calling for his life. 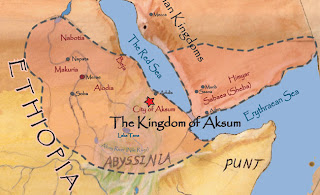 The basic frame work for Mekonnen’s adventure is Bible based, from a Judeo-Christian’s point of view. This story is not intended to promote any particular religion or church denomination but is dedicated all believers in Jesus Christ and all that believe in a one true almighty creator of the universe and represent all that is good and pure. You will notice a lot of imagery, festivals and languages that are dominant in the Ethiopian culture and religion - especially in Book one - which is used to set the atmosphere and background for that particular period in history. As the story progresses characters of various cultures and ethnic backgrounds will be introduced, some becoming major or supporting characters.

Even though the Epic of Mekonnen was initially inspired by sacred scriptures and ancient writings, I’m hoping it will have a universal appeal to a wide audience and that many may be inspired. It has spiritual symbolism but for a general audience, like C. S. Lewis’ The Chronicles of Narnia series, J.R.R. Tolkien’s Lord of the Rings trilogy and the Ben Hur movie(s). Like any good fantasy tale Mekonnen epic most be balanced with enough down to earth situations that we can relate to, like when a loved one dies, falling in love, looking up to a mentor or becoming prideful and falling to temptations. And a good measure of action, suspense and intrigue to keep you of the edge of your seat, turning the pages for more.


View the Mekonnen Epic Flash site here
Buy T-Shirts and many other merchandise with Mekonnen themes at
www.cafepress.com/MekonnenEpic
J. Matiyas
1/29/2011


[To be continued. Stay tuned for Part 2]
Posted by Mathiyas at 3:28 PM No comments: