The Evolution of the Mekonnen Title Logo

In this post I will show the steps on how the title logo has changed in concept and style through the years.

1) In the beginning I called the main character “Martigon”. In the graphic logo above I did an extrusion and percpective effect in Corel Draw. I did this a long time ago (late 1990s) so I can’t remember exactly which effects I used.

3) Above, I did more sketches and drafts, experimenting with different styles and concepts. I took away the percpective effect and kept the letters straight.

4) I decided on the font styles I prefer for the title. I placed it on a colorful background to see what it will look like. Notice the yellow Ethiopian text on the right, aligned vertically it spells “Mekonnen”.

5) In this concept I make the last letter ‘N’ larger again, centered “The Epic Adventures of” and added a brown spear at the bottom of the Mekonnen title.

6) I took that title concept and placed it on a background which is a map of part of the world. Notice I added Ethiopic/Amharic text script inside the spear graphic that says “Mekonnen’s Great Adventure: Aksumite warrior”.
-------------------------

7) Finally, I used Adobe Photoshop to make the title “Mekonnen” look like gold, placed “The Epic Adventures of” above the “M” and added an Abyssinian/Sheban sword instead of a spear at the bottom.
8) Sometimes I place two swords at the sides of the title instead.
*---- The End ----*
Posted by Mathiyas at 2:55 PM No comments:

Hi friends.
This past Thanksgiving weekend I set up a couple of online stores for the artwork and story of Mekonnen and other pieces of art that a not associated with the story. You can now have art from the Epic of Mekonnen on:
My brother Joel told me that he had a store that he set up for free at Cafepress.com to try to sell artwork he did for his music and cd releases and encouraged me to check it out and sell my artwork.
So that same evening and went right into Cafepress.com, read there rules and regulations, researched some more and compared to other similar companies, then setup a couple of free virtual stores in a few hours.

Check them out at these links and see if you find something you would like to wear, put on your wall or gifts for your loved ones. 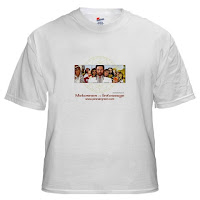